We covered the basics of integrated marketing in this article. Now, let’s study those who do it best: big brands, like your OEMs. Over the last two decades, manufacturers have received countless awards for their integrated automotive marketing. But there are three OEM campaigns that really gripped our attention.

Even though these campaigns were done by big-name ad agencies, your dealership (or your agency!) can just as easily follow the recipe for an integrated campaign. All you need is… The Recipe For Dealership Integrated Marketing

If you want a campaign that’s bigger than a stand-alone message, it needs to have a bigger idea. The idea needs to really interest your consumers, and offer them a different or greater perception of value than before.

The Big Idea transcends media: no matter what channel delivers the message, the idea remains powerful. In other words, it’s not just a big idea that translates within one creative area. It’s a big idea realized across many areas.

The way the average person consumes information has changed. Consumers are now much more fleeting, and lose interest quickly. This means that in order to successfully deliver your message to your target audience, your message must be strategically distributed over various channels.

(Since every integrated campaign follows these 4Cs, we won’t expand on them for each campaign below. However, if you want to learn more about the 4Cs and what they mean, read this article: Dealership Integrated Marketing 101: Rethink Automotive Advertising

3 Integrated Automotive Campaigns That We Love For the reveal of the new Chevy Sonic, Chevy took the launch quite literally made it about the Millennial preference for action (not ads) through a variety of customer-controlled stunts.

This campaign’s main channel were the big stunts it developed, but each stunt was brilliantly promoted throughout the following channels: Wanting to attract Millennials, Toyota first had to overcome the common fears and objections held by first-time buyers. To do this, Toyota’s Big Idea was to bring the “Game of Life,” themed after Hasbro’s board game, to Millennials. This playful symbol offered Millennials something engaging and familiar that they could identify with as they navigated the next chapter of their lives.

Toyota wanted to use engaging media and content designed to be easily watched and shared, regardless of platform: 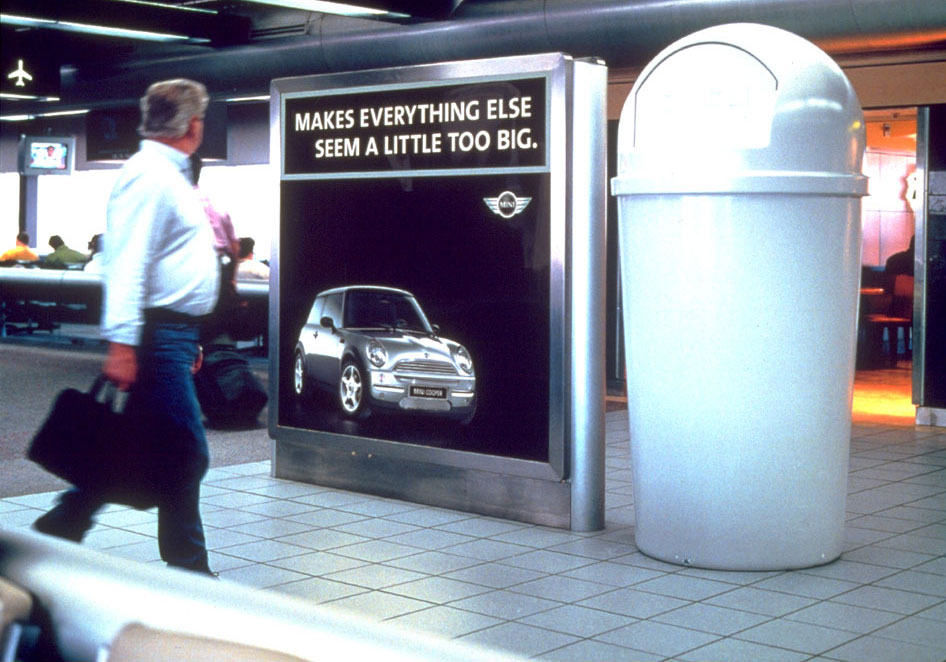 The Mini had a meager 2% brand awareness in the US until advertisers decided to exaggerate what made it so different: its size. These exaggerations created a memorable, larger-than-life personality for the brand, and really made a wave in Mini history.

Instead of the same TV/print/radio formula, Mini decided to play up the size of its car by placing its tiny cars where only a tiny car could go, focusing primarily on Out-of-Home and guerrilla advertising.

Whether you are a single-point store or have multiple rooftops, the same advertising principles that your big-brand-OEM uses should also be used by your store. Pete Barry, author of The Advertising Concept Book, found that:

Your dealership is a sub-brand of your OEM, just like iPhone and iTunes are sub-brands of Apple. This means you should complement (hello, 4Cs!) your OEM’s integrated marketing strategies, not contradict them.

As dealers, it’s your job to bridge the gap between the OEM’s commercial and the consumer who wants the car. If your marketing fails to be as integrated as theirs, you lose out on taking advantage of the opportunity they’ve created for you.

And integration isn’t just for your OEM-dictated sales events. It should be in every store-specific promotion you do. Doing a one-owner promotion on your used inventory? Integrate it!

Remember, you don’t have to throw 100 billboards up on I-10 and have a blimp circle the skyline to be considered “integrated.” It’s all about the consistency of your concept, the strategy behind your channels, and the overall Big Idea.