There’s a battle raging in the land of pay-per-click (PPC), and Facebook Advertising and Google AdWords are apparent enemies.

But for car dealers, it isn’t really a question of which to put advertising dollars toward. It’s why you should do both. Before examining the difference between Facebook and Google ads, this article assumes your dealership has already advertised on Google, an essential channel for auto dealers. The in-depth arguments you’ve heard about SEO and content creation are all rock solid and need not be debated.

However, if you’re ready to crush the new age of digital advertising, Facebook is the place to start.

Here are the 3 differences between Facebook and Google ads:

One of the reasons we’re urging our dealer-members to flock to Facebook is because it’s basically an advertising No Man’s Land: no one is dominating it—yet.

On the other hand, since Google’s ad platform has been everyone’s starting point for digital marketing, it’s now clogged with every dealership in the nation vying to be shown first.

That means that dealers are spending a lot more money for much less visibility on Google. 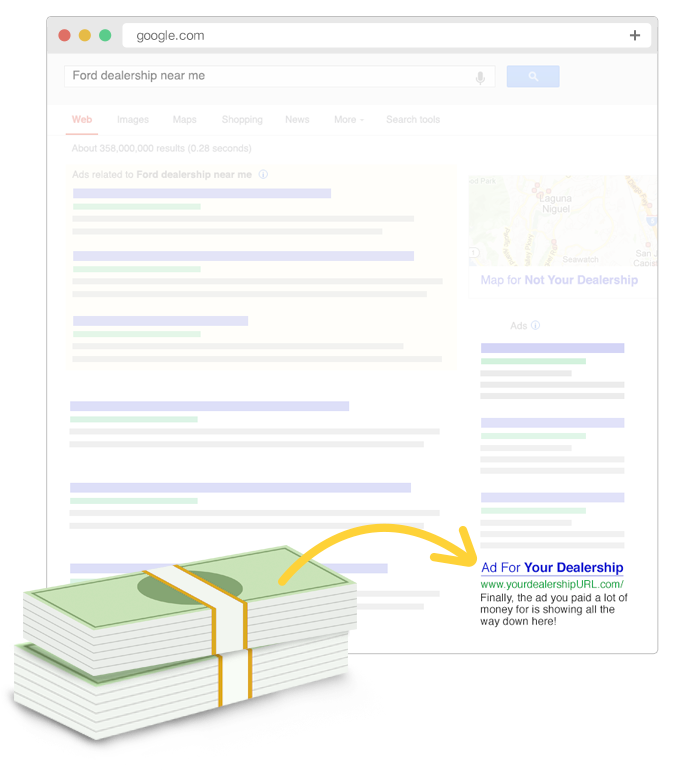 Heads up! Google removed their sidebar ads as of March 2016. Find out how this affects your dealership’s Paid and Organic Search in this article.

But there are so few dealerships using Facebook Ads right now and ad inventory is so low. The first to try them are getting incredible ad placements for cheap costs-per-click.

Google’s mission is to “organize the world’s information and make it universally accessible and useful.” In other words, Google depends on search phrases before it can serve it’s purpose (and your ads).

With Facebook, you’re targeting people based on who they are rather than the information they’re looking for.

We call this “proactive” advertising.

“
With Facebook, you’re targeting people based on who they are rather than the information they’re looking for. We call this ‘proactive’ advertising.”

Based on third-party automotive data and its own vat of detailed user data, Facebook displays your dealership’s ads to who they already know are interested, In-Market Car Shoppers.

The digital marketing experts at WishPond found that while the reactive nature of Google Ads is best for immediate sales, Facebook Ads are actually best for proactive lead generation.

That’s because Google is for customers actively searching for a product will obviously be further in the sales funnel, and Facebook Ads appear in front of consumers who aren’t hitting the “Search” button just yet.

Plus, though Google has a larger reach (90% of the world’s 3 billion internet users will use Google at least once a month) and sometimes yields lower CPCs compared to Facebook, Facebook Advertising’s auto-driven data points are well worth the extra coin.

Remember: every click on a Facebook Ad means another In-Market Car Shopper landing on your Search Results Page (SRP).